Last month, the Association for Public Policy Analysis and Management (APPAM) hosted its fall research conference in Washington, DC. It was my first time at the conference, and based on some informal data collection at the Mathematica booth, I was in good company. Over the three-day event, experts from Mathematica fanned out to present research findings in breakout sessions, debate issues as panelists, and engage the APPAM community in an informal dialogue about new ideas in public policy research at the Innovation Lounge. I compiled some of the weekend highlights here. 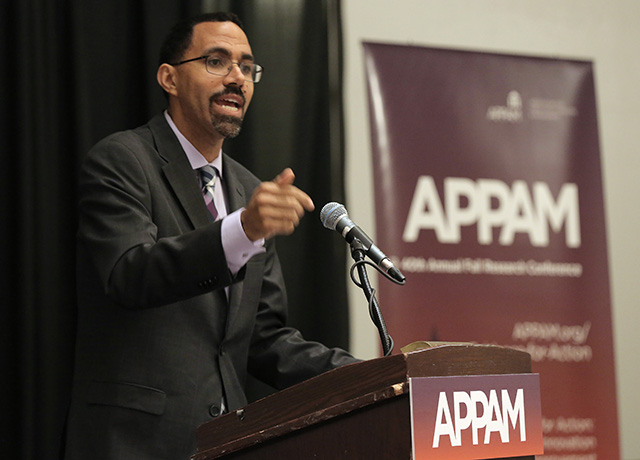 “Too often in our society we give the kids who need the most, the least.”—Former U.S. Education Secretary John B. King during a speech at the Equity and Inclusion Fellowship Luncheon (Photo: Rich Clement)

U.S. Education Secretary John B. King was the keynote speaker at the luncheon, a part of APPAM’s Equity and Inclusion Fellowship program. The program encourages students typically underrepresented in the policy research community to participate in APPAM and its activities by covering conference expenses related to travel and participation. (Mathematica was a cosponsor of the fellowship and the luncheon.) King is a former social studies teacher and middle school principal who became the first African American and Puerto Rican to serve as state education commissioner for New York. In 2015, he joined the Obama administration as the acting deputy secretary of education. About a year later, he was confirmed as the U.S. education secretary. During his speech at the APPAM luncheon, King joked that he was the first U.S. education secretary to be kicked out of high school. Both of King’s parents died by the time he was 12, and he credits his teachers in the New York City public school system for providing the support and guidance that enabled him to become the U.S. education secretary. 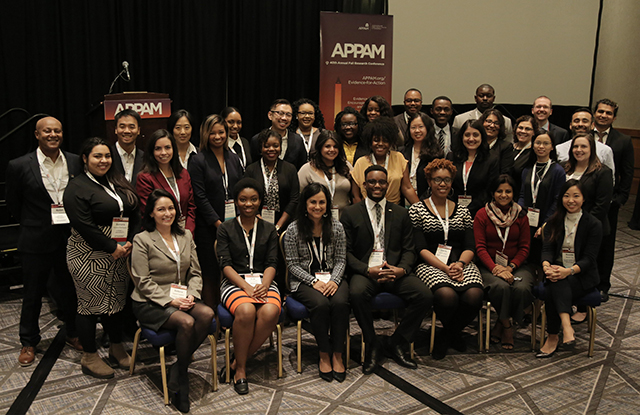 The APPAM 2018 Equity and Inclusion Fellows who attended King’s talk. You can find a full list of the fellows, along with their biographies, here. (Photo: Rich Clement) 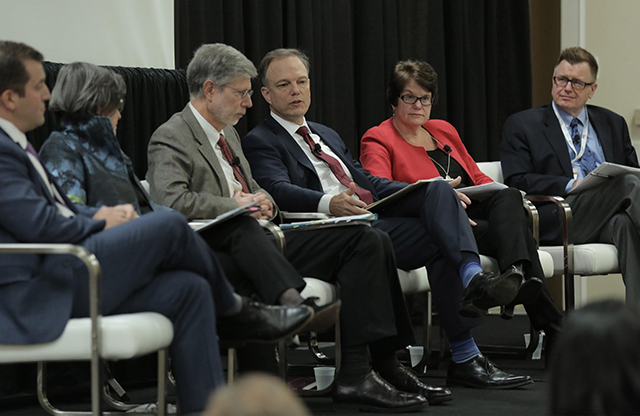 “Over time, we've migrated our work to be closer to the decision makers....We wanted to stay true to our mission of having an impact on public well-being by our research having an impact. So we began to migrate, we began to think of ourselves as more than just detached scientists doing cool public policy research.”—Paul Decker, president and CEO of Mathematica Policy Research, speaking on a panel with the leaders from five research organizations about how the field has changed and where it’s going (Photo: Rich Clement)

Mathematica President and CEO Paul Decker joined leaders from the Urban Institute, Abt Associates, IMPAQ International, and MDRC in a panel to discuss how the policy research field is evolving. Several panelists talked about their organizations having to focus more on long-term partnerships with the local decision makers or changemakers and said that technology is disrupting the industry as well. The field is entering a data analytics era, Decker said. In the past, data were scarce and static, which meant research tended to be expensive and slow. “What’s changed? Data are everywhere now. Easily accessible. Cheap to gather,” he said. Firms also have technology that can exploit large volumes of data like never before. “The data flow every day, they’re dynamic, so we’re no longer creating a static database that gets mined to death,” he added. “In fact, most data may change every day and that adds to our ability to leverage those data to draw out insights.”

“We wanted to increase the opportunities for people to be at the conference but engaging with others. So we created the Innovation Lounge, where people could post ideas they are working on and invite people to come in and chat about it.”—Matt Stagner, president-elect of APPAM and a senior vice president at Mathematica 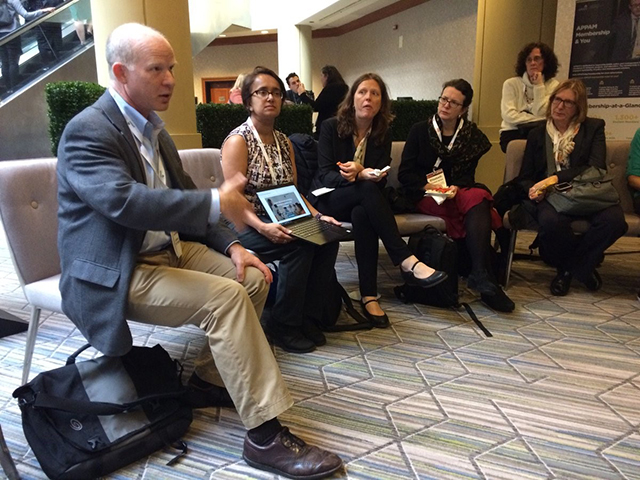 The Innovation Lounge featured more than 20 informal conversations between researchers and conference attendees on a wide range of topics, from pay-for-success contracting to early childhood education. The lounge sessions placed a premium on audience interaction and banned the use of formal PowerPoint presentations.

A graphic visualization asks when attendees first fell for APPAM. 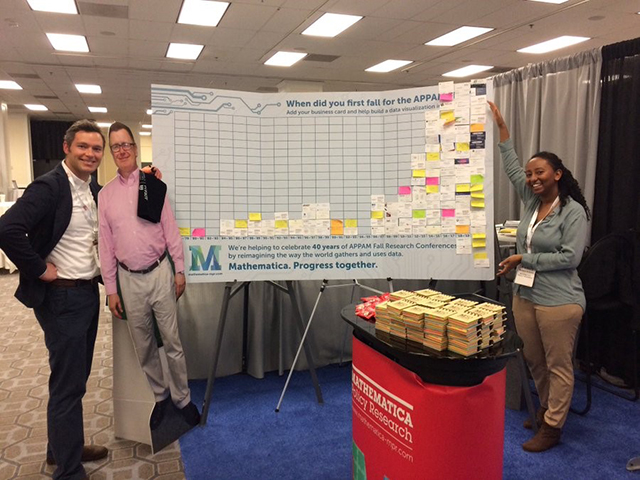 Mathematica’s J.B. Wogan and Menbere Shiferaw pose in front of the display along with #FlatMatt, the two-dimensional (but still very popular) cardboard cutout of Matt Stagner.

Both APPAM and Mathematica celebrated big birthdays in 2018: APPAM’s 40th and Mathematica’s 50th. To engage conference attendees, we invited them to pin their business card on the year they first attended an APPAM conference. We haven’t rigorously analyzed the results, but we suspect some self-selection bias might be present: the vast majority of people clustered around the most recent years. 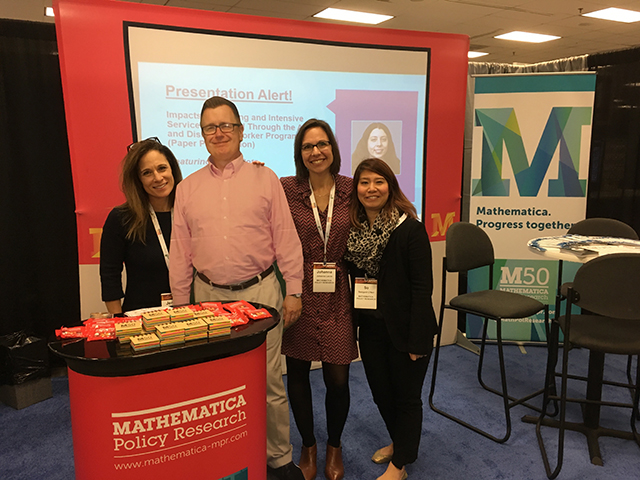 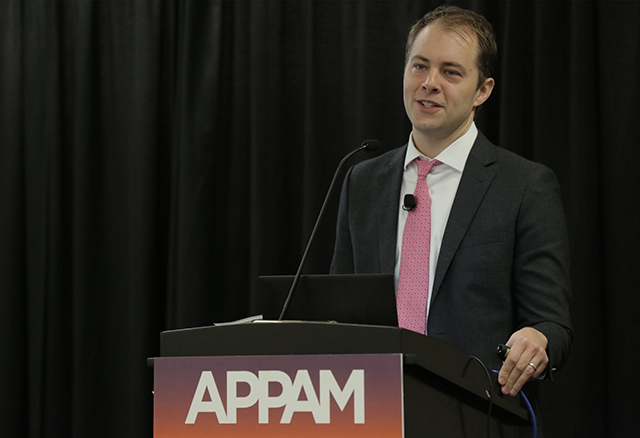 “Education ‘works’! Yet it’s inequitably distributed, especially at the college level. So increasing access would reduce inequality. But we don’t know why, and we need to know *why* to make colleges *better* than they currently are.” —Harvard University professor David J. Deming, winner of the David N. Kershaw Award and Prize, summarizing the main points of a lecture he delivered at APPAM in a Twitter thread. (Photo: Rich Clement)

Harvard University Professor David J. Deming’s talk (called “What Does Education Do?”) stems from his research in the areas of education, employment training, and job skills. He is the 19th winner of the Kershaw Award, established to recognize young professionals under the age of 40 who have made distinguished contributions to the field of public policy. (David N. Kershaw, for whom the award is named, was Mathematica’s first president.) In his talk, Deming argued that postsecondary education has played an important role in rising economic inequality over the last 40 years. “If we want to reduce economic inequality in the US, we must find a way to equalize access to postsecondary resources,” he writes. Beyond expanding college access, he said, we must also deepen our understanding of how college builds skills and why it might be creating inequality in skills. 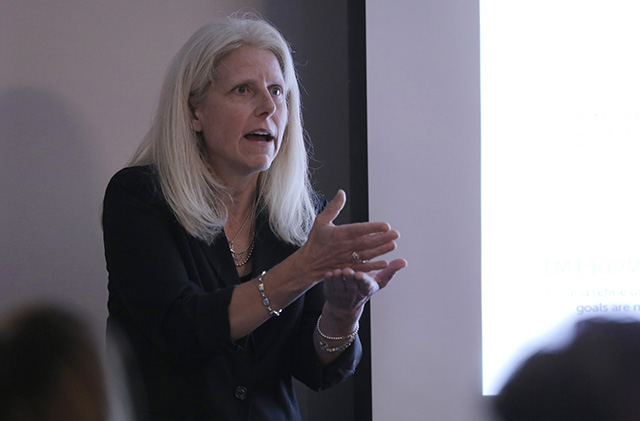 “I describe myself as a researcher gone rogue.” —Mathematica's Michelle Derr talking about the behavioral science-informed approach she and her team created with practitioners to help human services agencies improve employment outcomes (Photo: Rich Clement)

Michelle Derr was among dozens of Mathematica experts who, in all, presented more than 30 papers at the conference. She described an evidence-based model for goal setting in public agencies, both for the caseworkers and their clients. Other Mathematica paper topics included the impacts of pay-for-performance bonuses on students and teachers, the impacts of intensive employment services and training on adult dislocated workers and the estimated causal effect of incarceration on the educational outcomes of youth. You can find a full list of presentations by Mathematica staff here. 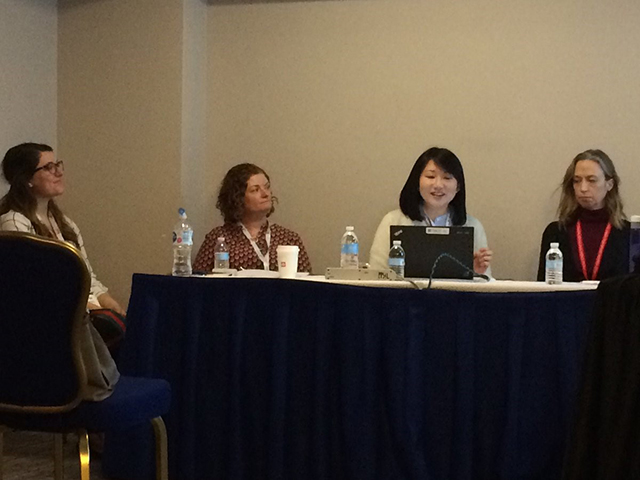 Tips for Boosting the Reach and Impact of Policy Research

10 Ways to Extend the Reach of Your Work