When DC Councilmember David Grosso introduced the Student Fair Access to School Act of 2017, he joined a growing number of city officials who support changing discipline policies to keep kids in school by minimizing the use of expulsions and suspensions for low-level offenses. There’s no question that out-of-school suspensions reduce the instruction time suspended students receive, but emerging evidence reveals that such suspensions can lead to disengagement from school, decreased academic achievement, and an increased likelihood that suspended students will repeat a grade or drop out of school entirely. Researchers have also found that African American children experience exclusionary discipline practices at a disproportionate rate when compared with their white peers. These troublesome trends have led many school districts to implement, or consider implementing, policy reforms designed to reduce the use of out-of-school suspensions for nonviolent offenses. 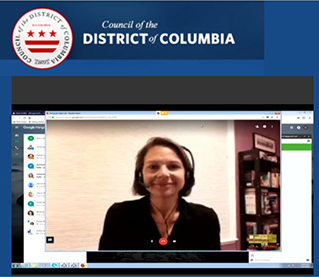 Mathematica’s Johanna Lacoe provided virtual testimony to the Council of the District of Columbia’s Education Committee on January, 30 2018.

During a January 30 hearing of the DC Council about such legislation, I presented findings from a study of similar school discipline reforms in Philadelphia that I conducted along with my colleague Matthew Steinberg from the University of Pennsylvania. It was the perfect opportunity to engage directly with decision makers, school officials, and education policy leaders in the district who, I hope, will use this information to make more informed, evidence-based decisions about school discipline reform practices.

Here are a few key takeaways that I shared with the council as it considers discipline reforms.

Philadelphia reformed its student code of conduct during the 2012–2013 school year to prohibit suspensions and expulsions for two types of nonviolent violations: failure to follow classroom rules and use of profane language. We found that despite the seemingly clear legislative directive, different schools implemented the new policy in greatly varying ways. In fact, many Philadelphia schools did not comply fully with the policy change.

Why? Although the policy change in Philadelphia did encourage schools to consider alternative approaches to suspensions and expulsions, it provided little guidance—and no financial support—for schools to implement them.

As I told the councilmembers, should they continue similar reforms, policy leaders and administrators must be prepared to support schools—through clear guidance and dedicated resources—to fully and consistently adopt those practices.

Change is good, but always consider the unintended consequences

The goal of these reforms, of course, is to keep students in the classroom. Our study showed just that—suspensions for low-level infractions decreased by about 1 suspension per 100 students in the year following the policy changes. For students suspended for classroom disorder infractions in the pre-reform period, school absences declined following the district’s policy reform, and academic proficiency in math improved modestly.

Good news, right? Not quite.

Because out-of-school suspensions disproportionately center on minority students and students who receive special education services, we also examined how changes in the School District of Philadelphia Code of Conduct addressed these disparities. Our study revealed an unintended impact on minority students. The policy change decreased the use of suspension for low-level offenses for African American students relative to their white peers—but these declines were more than offset by an increase in suspensions for more serious offenses among African American students relative to white peers. What this means is that observed improvements in the disproportionality of suspensions for low-level offenses might have resulted from shifting punishments for minority students toward more serious offenses.

The District of Columbia, and any other large school district looking to institute similar discipline reforms, must consider this unintended consequence before the policy is implemented.

Our work in Philadelphia would not have been possible without detailed, student-level data collected on behavioral issues and punishments that occurred over time. I’m encouraged that DC is already collecting student-level data and that the bill under consideration specifically calls for enhanced collection of data on disciplinary practices. Ongoing data collection activities enable social policy researchers like me to provide reliable and informative feedback on the effectiveness of policy change on student behavior and achievement. But, there’s still a lot we don’t know.

As I said to Councilmember Grosso and other members of the education committee: although out-of-school suspensions appear to be a convenient, low-cost response to student misbehavior, they don’t address the classroom management issues or student needs that underlie behavior problems.

It follows that a comprehensive approach to school discipline reform will involve more than just changing codes of conduct to restrict the type or length of punishments doled out to students. To truly improve students’ outcomes and reduce racial disparities, policymakers should invest in—and test—holistic approaches aimed at improving school climate and culture for all students, preventing misbehavior, and responding to remaining behavioral problems in a way that addresses the root causes and provides longer-term solutions.