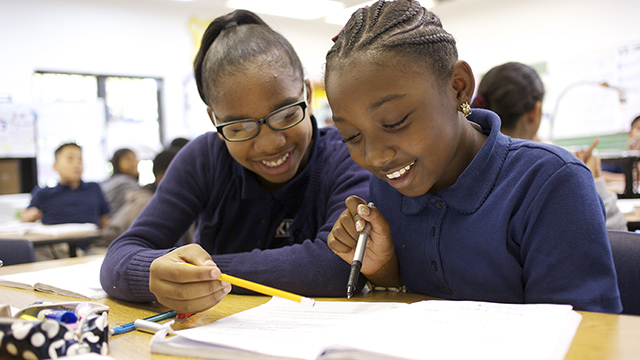 According to a new study from Mathematica, students who attended Knowledge Is Power Program (KIPP) middle schools were substantially more likely to enroll in four-year colleges.

The finding is based on a study tracking students who applied to attend KIPP middle schools more than a decade ago, through an admissions lottery. According to the study’s primary analyses, students who won a lottery-based admissions offer were 6.9 percentage points more likely to enroll in college within two years after graduating high school. However, this conservative “intention-to-treat” (ITT) impact estimate does not adjust for which students actually attended KIPP after the lottery (only 68 percent of the lottery recipients actually attended KIPP, and 16 percent of those not selected or admitted also went on to attend KIPP schools in later years).

In an exploratory analysis, the study made additional assumptions to adjust for who attended KIPP, and found that the “treatment-on-the-treated” (TOT) impact estimate nearly doubles in size. Students who attended KIPP schools were 12.9 percentage points more likely to enroll in four-year colleges.

KIPP schools predominantly educate low-income students of color, with the goal of closing achievement gaps and preparing students to succeed in college. The increase in college enrollment rates observed in this study is not only statistically significant, but the impact of attending a KIPP school (12.9 percentage points) is almost the same as the nationwide racial disparity in college enrollment rates (14 percentage points).

The study also tracked the students who enrolled in college immediately after high school, and examined whether they remained in college programs over the next two years. Students who attended KIPP middle schools were more likely to still be enrolled in college after two years (33 percent) than similar students who did not attend KIPP middle schools (24 percent). Although rates of entering college immediately and then persisting for two years were higher for KIPP students, this difference was not large enough to be statistically significant.

The initial effects of KIPP middle schools on college enrollment rates are promising, but more time is needed to gain a clearer picture of KIPP’s effects on college persistence. In future years, it will be possible to observe college persistence rates among students who did not enroll immediately after high school and test whether KIPP ultimately impacts college graduation.

“Even though previous Mathematica studies showed KIPP had large positive impacts on student test scores, whether these gains led to improvements in college enrollment has been an open question, until now,” said Ira Nichols-Barrer, the study director. “These results show that KIPP middle schools produce a positive and statistically significant impact on enrollment rates in four-year college programs.”

“The results of the Mathematica study are really promising,” said Richard Barth, chief executive officer of the KIPP Foundation. “We made a commitment 25 years ago to help students climb the mountain to and through college, and these numbers show that we are moving closer to delivering on that promise on a national scale.”

The study tracked 1,177 students who applied to enter 1 of 13 oversubscribed KIPP middle schools through a 5th- or 6th-grade admissions lottery in 2008 or 2009. A randomized controlled trial design ensured that students offered admission (the treatment group) were similar on average to those who did not receive an offer of admission (the control group) on characteristics such as prior test scores, levels of motivation and parental support. Mathematica gathered data from the National Student Clearinghouse on college enrollment and estimated KIPP’s impacts by comparing students in the treatment group with students in the control group.

Read more about the study.

Mathematica is the insight partner that illuminates the path to progress for human services agencies. We apply expertise at the intersection of data, methods, policy, and practice, translating big questions into deep insights to improve programs. For more information, visit https://www.mathematica.org/our-focus-areas/human-services.

KIPP, the Knowledge Is Power Program, is a national network of 242 public charter schools dedicated to preparing students in educationally underserved communities for success in college and life. KIPP schools are part of the free public school system, and enrollment is open to all students. Started in 1994 as a middle school program, KIPP has since expanded to enroll more than 100,000 students in all grades from pre-K through high school. Nationwide, KIPP students complete their bachelor’s degree at a rate of 35 percent, comparable to the national average for all students and approximately three times higher than the average for students from low-income families.

In this report, we present the results of a long-term tracking study that follows 1,177 students who applied to enter 1 of 13 oversubscribed KIPP middle schools through a 5th or 6th grade admissions lottery in 2008 or 2009.