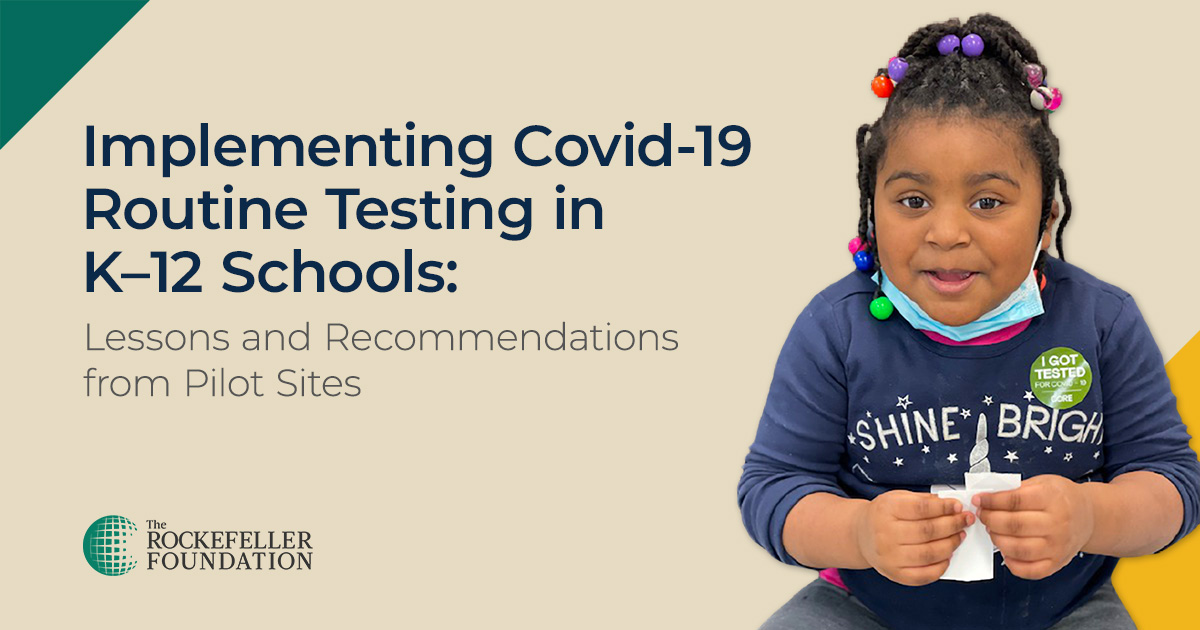 Photo By: The Rockefeller Foundation

As more than 56 million children prepare to return to U.S. schools this fall, a new analysis provides evidence that implementing routine COVID-19 testing can significantly reduce—and in some cases eliminate—in-school transmission of the virus. The Mathematica report funded by The Rockefeller Foundation, offers critical guidance and considerations for schools and districts as they prepare to offer routine school-based testing in the fall as part of an effort to safely reopen.

The report, Implementing COVID-19 Routine Testing in K–12 Schools: Lessons and Recommendations from Pilot Sites, is based on the experiences of education and public health leaders who implemented school-based testing through The Rockefeller Foundation’s K-12 Testing Protocol Demonstration Project. Testing took place in 335 schools and affiliated locations during the 2020–2021 school year across six sites: Louisville, Kentucky; Los Angeles, California; New Orleans, Louisiana; Tulsa, Oklahoma; the District of Columbia; and the state of Rhode Island. Interviews and data came from the pilot sites, and the report also included statistical modeling to estimate the potential impact of different testing strategies on key outcomes such as in-school transmission.

“School leaders have been working overtime to protect our children in this constantly evolving pandemic,” said Divya Vohra, senior researcher at Mathematica, who served as the lead learning partner for the demonstration project. “Sharing what they’ve learned and their best practices will ensure our schools are even safer this fall.”

Key findings from the report include the following:

Based on findings from the model, Mathematica created an interactive impact estimator that allows users to compare the effectiveness of different routine testing strategies.

Early insights and recommendations from the K–12 Testing Protocol Demonstration Project, published in January 2021, contributed to the Biden administration’s decision to allocate $10 billion to support in-school testing programs more widely. The refined testing protocols were released in March 2021 as part of a playbook that offers step-by-step guidance for how to implement school-based testing. The Centers for Disease Control and Prevention cites the playbook as part of its guidance for COVID-19 prevention in K–12 schools released in July 2021.

The Rockefeller Foundation partnered with K–12 schools in pilot sites across the country to implement routine COVID-19 testing. This report discusses lessons and recommendations based on pilot sites’ testing programs, as well as findings from agent-based modeling.