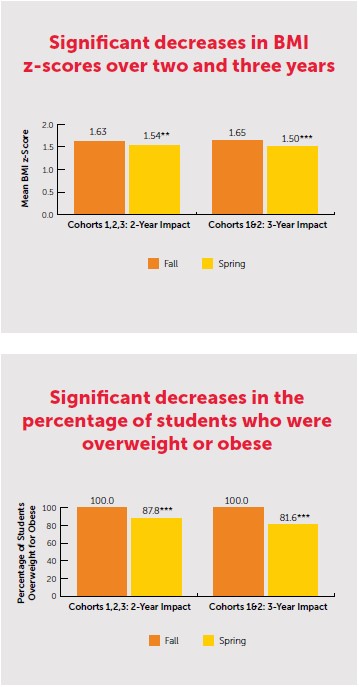 For overweight and obese middle and high school students enrolled in Harlem Children’s Zone (HCZ) after-school programs, participation in Healthy Harlem led to sustained positive impacts on physical fitness and weight status, according to interim findings from Mathematica. To assess Healthy Harlem’s effectiveness, researchers monitored students during an initial baseline year and then measured program impacts after two and three years of participation. The findings reveal that participation in Healthy Harlem’s Get Fit and Prevention components resulted in lower body mass index (BMI), a reduction in the percentage of students who were overweight or obese, and increased levels of physical fitness.

In 2011, HCZ determined that nearly half of students ages 12 and older who participated in HCZ programs were overweight or obese. To combat this issue, HCZ partnered with the JPB Foundation to design and implement Healthy Harlem, an intensive set of services that promote healthy lifestyles, provide nutrition education, and provide opportunities for physical activity. Mathematica conducted a comprehensive evaluation of Healthy Harlem, including an implementation study that examined program rollout and an impact study that assessed short- and long-term program impacts across several sets of outcomes, including BMI and fitness.

This issue brief focuses on fitness outcomes of overweight and obese middle and high school students who received both the Prevention and Get Fit components of Healthy Harlem, after two and three years.

The Impact of Healthy Harlem on the Prevalence of Child Overweight and Obesity and Contributing Factors: Interim Evaluation Report