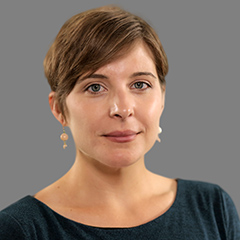 Marykate Zukiewicz is a senior researcher with diverse experience in several key areas, including education, criminal justice and family support. She has played a lead role in both local and national evaluations, implementation and process evaluations, evidence-based technical assistance projects, and systematic evidence reviews.

Zukiewicz has led a number of state and local projects, several of which were conducted in her home state of Colorado. Together with the Colorado Evaluation and Action Lab and the Colorado Department of Corrections, she leads a collaborative partnership focused on identifying successful reentry practices for individuals in prison and on parole. Zukiewicz has also led several evidence-based technical assistance projects with local human service agencies in Colorado, including technical assistance on the use of rapid-cycle evaluations to test and refine program improvement efforts.

In addition, Zukiewicz has played a lead role in several large-scale, national projects. She has served as task lead on several education studies, including her role as recruitment task lead for the Data-Driven Instruction Study and her role as lead author on the implementation analysis conducted for the Teach For America Investing in Innovation study. Within the area of early childhood, Zukiewicz has led the Home Visiting Evidence of Effectiveness impact study review team, applying rigorous evidence standards in the identification of evidence-based maternal and infant home visiting programs eligible for federal funding.

Prior to joining Mathematica, Zukiewicz served as a corps member in Teach For America’s New York City program and also worked as a legislative director at New York City Council. She presents her work at conferences sponsored by the Association for Public Policy Analysis and Management, the Association for Education Finance and Policy, and other organizations. She holds an M.P.A. from New York University and an M.Ed. in bilingual education from the City University of New York Lehman College.