Connecting Inmates to Public Workforce Services Prior to Release: The Linking to Employment Activities Pre-Release Grants 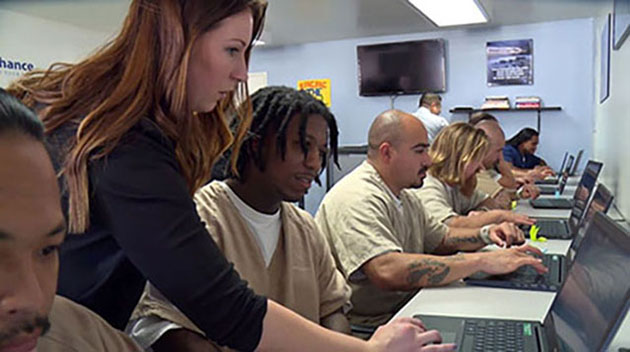 One of the grant-funded American Job Centers at the East Mesa Reentry Facility in San Diego County, California.(Photo used with permission from the San Diego County Sherriff’s Office)

Close to 9 million people are released from jail each year, nearly 12 times the number released annually from prisons. Re-integrating these individuals back into society after discharge is a key policy issue. Although many experts believe that stable employment is critical for ex-offenders to transition back into the community successfully, policy initiatives and research have focused on employment services and programs available after an inmate’s release. This study looks at whether focused activities and increased coordination between the public workforce system and local correctional facilitiesprior to release may substantially improve employment outcomes for former inmates.

The Linking to Employment Activities Pre-Release (LEAP) initiative an ambitious effort to identify effective models that can strengthen ties between the public workforce system and local correctional facilities by establishing satellite American Job Centers (AJCs) in local jails and ensuring a “hand off” of participants on release to continue service receipt at community AJCs. Working with Social Policy Research Associates, Mathematica conducted a 36-month evaluation through site visits, phone interviews, focus groups, and analysis of the grantees’ quarterly performance reports. Mathematica’s descriptive implementation study examined how the grant-funded efforts were operated at each of the 20 sites, whom the jail-based AJCs were reaching, what challenges existed in locating AJCs within jails, and what strategies were used to successfully overcome these challenges.