Updated nutrition standards called for in the Healthy, Hunger-Free Kids Act of 2010 (HHFKA) have made school meals significantly healthier, according to a recent article by Elizabeth Gearan and Mary Kay Fox for the Journal of the Academy of Nutrition and Dietetics. Gearan and Fox analyzed data from two Mathematica studies that were funded by the U.S. Department of Agriculture’s Food and Nutrition Service—the third School Nutrition Dietary Assessment Study and the School Nutrition and Meal Cost Study—to examine differences in the nutritional quality of meals served in the National School Lunch Program and School Breakfast Program after the updated standards were implemented in 2012. The authors used the Healthy Eating Index (HEI)—which assigns scores to meals based on how consistent they are with the Dietary Guidelines for Americans—to assess the nutritional quality of school meals before and after the updated standards. Findings show that the updated standards succeeded in giving children access to more nutritious meals at school. 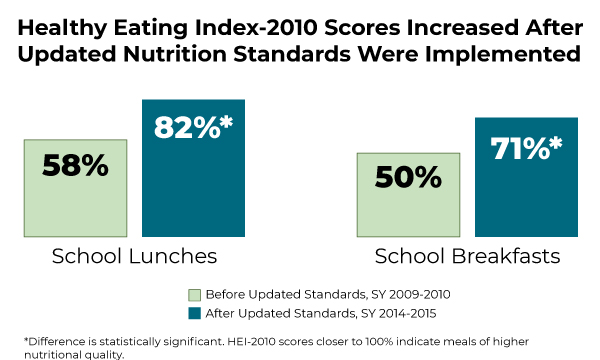 Meals served after the updated standards went into effect had significantly higher HEI scores, on average, than meals served previously. This indicates that the meals were more consistent with recommendations of the Dietary Guidelines for Americans.

Key findings are reinforced in a supporting Journal of the Academy of Nutrition and Dietetics research editorial by Juliana Cohen and Marlene Schwartz, which highlights the importance of having strong federal standards for school meals and refutes concerns that more nutritious meals will lead to decreased participation and increased plate waste.

The National School Lunch Program provides low-cost or free lunch to about 30 million children per day, and the School Breakfast Program provides breakfasts to about 15 million children per day. In 2010, the HHFKA mandated major reforms to these programs to better align meals with the most recent recommendations in the Dietary Guidelines for Americans. The updated standards increased the required amounts of fruits, vegetables, and whole grains and limited milk to fat-free and low-fat varieties. Results from these nationally representative studies, as described in the article, provide strong evidence that the updated nutrition standards have positively impacted the nutritional quality of school meals served to children, which could play an important role in efforts to improve children’s health and combat obesity.

This Journal of the Academy of Nutrition and Dietetics article sheds light on how updated nutrition standards called for in the Healthy, Hunger-Free Kids Act of 2010 have made school meals significantly healthier.