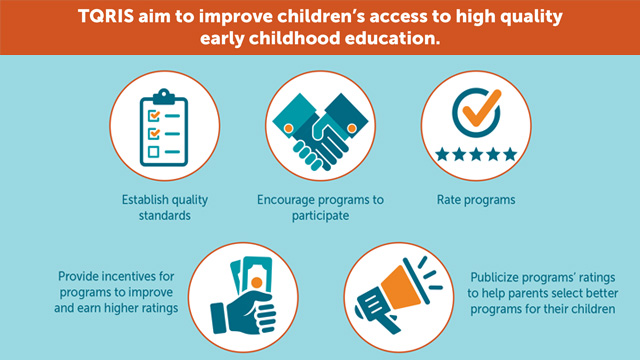 States that received grants under the Race to the Top-Early Learning Challenge (RTT-ELC) initiative made progress in developing systems that rate early childhood education programs on quality and help them improve, according to a new report released by the U.S. Department of Education’s Institute of Education Sciences. However, states differed substantially in the ways that they structured and implemented, promoted participation in, and rated and monitored programs in these systems. Through $520 million in the first of three rounds of grants, RTT-ELC aimed to improve young children’s access to high quality early childhood education. This is the first report from a multiyear evaluation of RTT-ELC conducted by Mathematica Policy Research.

RTT-ELC awards helped states develop and implement systems, known as tiered quality rating and improvement systems (TQRIS), that aim to improve the quality of early childhood education programs and help parents select better programs for their children. These systems establish rigorous standards to define quality, rate programs based on these standards, and publicize the ratings of individual programs. States use supports and incentives to encourage programs to participate in TQRIS and earn higher ratings.

The new report describes the progress these states made as of 2015 in the first three areas, noting the following:

“Tiered quality rating and improvement systems have flourished under Race to the Top-Early Learning Challenge funds. But, TQRIS take time to develop and implement and differ to reflect state priorities for quality improvement,” says Gretchen Kirby, a senior researcher at Mathematica and lead author of the report. “All the states can learn lessons about TQRIS implementation from the experiences of these nine.”

Follow-up work will focus on the last two areas by examining whether programs participating in TQRIS attained top rating levels and whether ratings convey meaningful differences in program quality.

Read the brief and a related infographic on the study.

Schools that received School Improvement Grants (SIG) to implement school intervention models used more of the practices promoted by these models than schools that did not receive grants. However, the SIG-funded models had no effect on student achievement, according to a new report released by the U.S. Department of Education.

Race to the Top: Implementation and Relationship to Student Outcomes

Race to the Top: Implementation and Relationship to Student Outcomes (In Focus)

Race to the Top: Implementation and Relationship to Student Outcomes (Executive Summary)