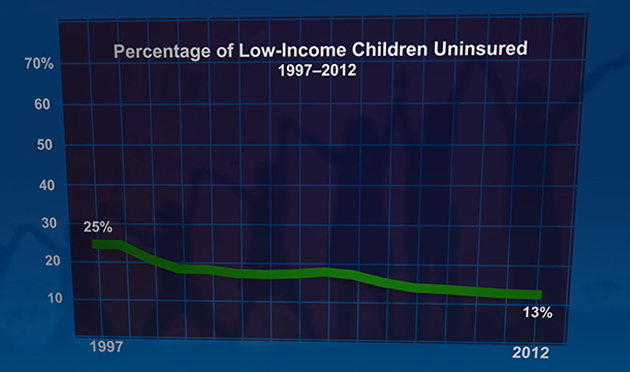 New evidence from a nationwide evaluation of the Children's Health Insurance Program (CHIP) reveals that CHIP has successfully expanded coverage for children who would otherwise be uninsured, thereby increasing their access to care and reducing financial burdens on their families. Mandated by the Children's Health Insurance Reauthorization Act (CHIPRA) of 2009, this evaluation presents new information on the evolution of CHIP from 1997 to 2012, including whether the program is meeting its goals and how it was affected by CHIPRA and the Affordable Care Act.

The evaluation revealed that:

Implications for the future of CHIP
Findings from this evaluation can inform future decisions about CHIP funding, policies, and programs. The positive impacts of CHIP were found for children and families in states with various program designs and features, across demographic and socioeconomic groups, and for children with a range of health care needs. However, improvements are needed to address remaining unmet needs for care, to reduce the percentage of children who cycle off and back on to Medicaid and CHIP, and to reach the estimated 3.7 million children who are eligible for Medicaid or CHIP but remain uninsured.

This study addressed a series of policy questions related to the impact of CHIP, the effective operation of CHIP programs, and the inter-relationship between and among CHIP, Medicaid, and employer-sponsored insurance coverage for low-income children.