The vast majority of Supplemental Nutrition Assistance Program (SNAP) participants who could be affected by the U.S. Department of Agriculture’s (USDA) proposed rule to tighten SNAP work waivers are in deep poverty and live alone, according to a new analysis conducted by Mathematica. The analysis, funded by the Robert Wood Johnson Foundation, examines a proposed rule from USDA, issued last month, which would make it harder for states to receive federal time-limit waivers for SNAP participants living in certain areas. Among the 1.2 million participants living in waiver areas who do not have a disability, do not live with children, and are not working the required average of 20 hours per week, the analysis reveals that:

In its Regulatory Impact Analysis, USDA estimates that, under the proposed rule, approximately 755,000 SNAP participants will ultimately lose their SNAP eligibility in fiscal year 2020. Others who are currently living in waiver areas will remain eligible, because they will increase their work-related activity to meet federal requirements, they live in areas that will continue to receive waivers, or they will continue to receive another type of state exemption.

“No one in America should go hungry or live in poverty. The findings of this analysis show that USDA’s proposed rule would disproportionately affect some of the most vulnerable SNAP participants,” said Giridhar Mallya, senior program officer, Robert Wood Johnson Foundation. “USDA should carefully consider whether this change promotes the ultimate goal of the SNAP program to reduce food insecurity.”

The analysis also finds that some states are more likely than others to be affected by the proposed changes—in particular, states where a substantial share of nondisabled childless SNAP participants age 18 to 49 do not work the required average of 20 hours per week, and would be subject to time limits if they did not live in waiver areas. In the District of Columbia and 11 states—Alaska, California, Connecticut, Georgia, Illinois, Kentucky, Louisiana, New Mexico, Rhode Island, Tennessee, and Washington—between 53 percent and 77 percent of nondisabled childless SNAP participants age 18 to 49 fall into that category.

“Our analysis shows that the impacts of these rule changes are not uniform,” said Karen Cunnyngham, a senior researcher at Mathematica. “A lot depends on a state’s choices around waiver policies and the health of the state’s economy.” 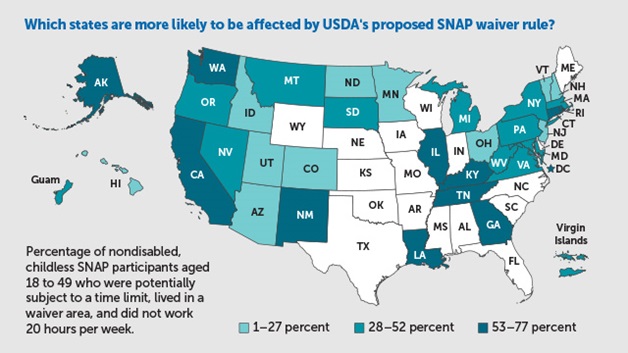 Currently, SNAP participants without a disability who are age 18 to 49 and live in childless SNAP households must work an average of at least 20 hours per week or face a time limit on their SNAP benefits of no more than three months of benefits in a three-year period. But states can exempt some SNAP participants from the time limit by requesting a federal waiver for a geographic area that meets USDA’s criteria for high unemployment or a weak labor market. Under the proposed changes, it would be more difficult for states, or parts of states, to qualify for a waiver. For example, areas with an overall unemployment rate at least 20 percent above the national average can currently qualify for a waiver; under the proposed rule, however, the area’s unemployment rate would also need to be at least 7 percent to qualify.

The following table provides state-level estimates of the percentage of SNAP participants that could potentially be affected by these changes. The brief is the third in a series examining the potential impacts of recent proposed changes to SNAP. Earlier briefs examined Farm Bill legislation in 2018 that would have affected SNAP participants’ eligibility for the program and the amount of benefits they could receive based on income levels and utility allowances.

This issue brief, the third in a series of briefs analyzing the impact of proposed changes to SNAP, provides background on SNAP work requirements, time limits, and proposed regulatory changes.