Hard Work on the Playground
News

Hard Work on the Playground 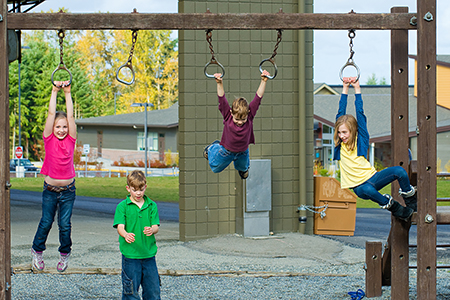 Although research has documented a link between physical activity and classroom success, many elementary school children do not have opportunities to engage in physical activity during a typical school day. Playworks aims to create a place for students on the playground to feel included, be active, and build social and emotional skills by placing full-time coaches in low-income schools to organize and oversee recess. The program’s goals are to engage students in physical activity, foster social skills, improve ability to focus on class work, decrease behavioral problems, and improve school climate.

Mathematica recently conducted the first rigorous evaluation of the Playworks program, and four academic journals have now published some of the results. The highlights and important findings from each journal article follow.

“The Impact of Playworks on Students’ Physical Activity During Recess: Findings from a Randomized Controlled Trial.” Preventive Medicine

This article reports on the impact that Playworks had on students’ physical activity during recess. The authors evaluated the impact of Playworks on measures of the intensity of students’ physical activity, number of steps taken, and percentage of time spent engaged in vigorous activity. The authors found significant impacts on some outcome measures, but not others. Teachers in Playworks schools reported that students were more active during recess, but accelerometer and student survey measures showed either no impacts or marginally significant impacts.

“Estimated Distributions of Usual Physical Activity During Recess.” Medicine and Science in Sports and Exercise

The first to examine specific distributions of usual physical activity in school-age children, this article makes an important contribution to the fields of sports medicine and exercise science. Focusing on the use of measurement error models to analyze the data, the authors found considerable intra-individual variability when measuring the distributions of students' physical activity. Without properly identifying and adjusting for intra-individual variability and other forms of measurement error in the data, physical activity estimates might be considerably biased.

“The Impact of Playworks on Boys’ and Girls’ Physical Activity During Recess.” Journal of School Health

Impact of Playworks on Play, Physical Activity, and Recess: Findings from a Randomized Controlled Trial