Since June 2015, the U.S. Department of Labor (DOL) has awarded $10 million in grants to 20 local agencies to test various methods of creating jail-based American Job Centers (AJCs). These jail-based AJCs aim to provide incarcerated people with crucial employment services to help them successfully reenter their communities upon release. When the grants were announced in 2015, DOL noted that many of the more than nine million people released from county and local jails each year have few job skills and face significant barriers to stable employment. These grants, called Linking to Employment Activities Pre-Release (LEAP), were designed to support efforts to better prepare incarcerated people to be ready for work upon release, to increase their employment opportunities, and to reduce recidivism rates.

Working with DOL, Mathematica conducted a 36-month evaluation through site visits, phone interviews, focus groups, and analysis of the grantees’ quarterly performance reports. Mathematica’s descriptive implementation study examined how the grant-funded efforts were operated at each of the 20 sites, whom the jail-based AJCs were reaching, what challenges existed in locating AJCs within jails, and what strategies were used to successfully overcome these challenges.

Mathematica released the final report and a compendium that synthesized results from a series of 10 targeted issue briefs. Key findings include the following:

The following are based on an analysis of data reported by grantees as of March 31, 2018:

As context for the reported outcomes, the sites had only been serving participants for 16 to 24 months when the final performance data were reported, and some participants were still incarcerated. Many who had been released were still working toward key education and employment milestones that were only reported for the first quarter after release and had not yet received a full year of post-release services in the community.

This evaluation suggests that introducing new services, partnerships, and ways of thinking about reentry could hold promise for lasting effects on the workforce and corrections systems. The experiences of the LEAP grantees highlight important lessons learned and some areas for continued refinement or potential replication in similar or different contexts. Although this implementation evaluation cannot make causal claims, the evidence suggests that it is possible to use jail-based AJCs to link participants to post-release services and that this might be a promising approach to support people in successfully reentering the community. 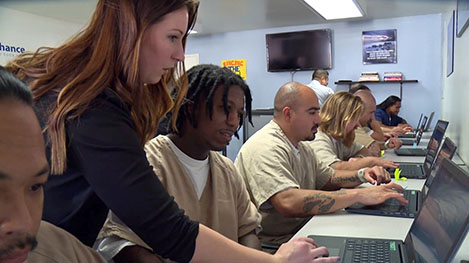 Connecting Inmates to Public Workforce Services Prior to Release: The Linking to Employment Activities Pre-Release Grants

This study looks at whether focused activities and increased coordination between the public workforce system and local correctional facilities prior to release may substantially improve employment outcomes for former inmates.