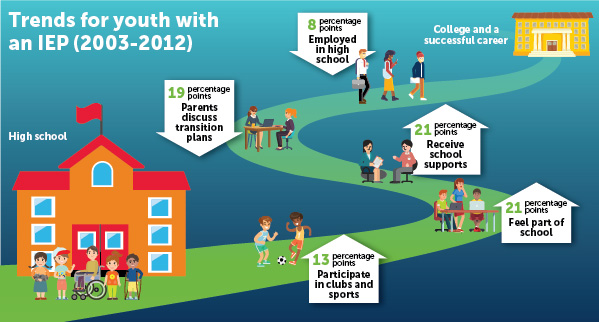 A large-scale study by Mathematica Policy Research finds that over the past decade (2003–2012), high school youth participating in special education became more engaged in school and increased their use of school supports. Both are outcomes encouraged by the most recent federal legislation supporting students with disabilities, known as the Individuals with Disabilities Education Act (IDEA 2004). At the same time, these youth, required under IDEA to have an individualized education program (IEP), are less likely than in the past to take some key steps to prepare for their transition to adult life. Among students with an IEP, youth with emotional disturbance or an intellectual disability experienced more positive changes over the past decade than youth in other disability groups.

The report, “Preparing for Life after High School: The Characteristics and Experiences of Youth in Special Education, Volume 3: Comparisons Over Time,” and an accompanying fact sheet, released today by the Institute of Education Sciences, presents new information on trends in the characteristics and experiences of youth in special education across the country. It is the third report from the National Longitudinal Transition Study 2012 (NLTS 2012). Mathematica is conducting NLTS 2012 for the National Center for Education Evaluation and Regional Assistance as part of the congressionally mandated national assessment of IDEA 2004, and it is the third study in the NLTS series commissioned by the U.S. Department of Education over the past several decades. This report volume compares survey data in 1987, 2003, and 2012 (from NLTS, NLTS 2, and NLTS 2012) focusing on trends for 15- to 18-year-olds with an IEP overall and in each of 12 federal disability groups.

“Parents, educators, and policymakers alike are concerned with creating pathways to adulthood and independent living for children with disabilities. This study compares how supports have changed over the past decade to help gauge progress in addressing the needs of youth with disabilities,” noted study director Joshua Haimson.

Key findings from the report include the following:

Through surveys of parents and youth in 2012 and 2013, the NLTS 2012 collected data on a nationally representative set of nearly 13,000 students—mostly those with an IEP and expected to receive special education services. The study also included students without an IEP, who either have no identified disability or who have an impairment that does not qualify them for special education but allows them to receive accommodations through a 504 plan under the Rehabilitation Act, another federal law pertaining to the rights and needs of students with disabilities.

Read more about Mathematica’s portfolio of research in special education.

“Preparing for Life after High School: The Characteristics and Experiences of Youth in Special Education. Findings from the National Longitudinal Transition Study 2012. Volume 3: Comparisons Over Time.”

This fact sheet from the National Longitudinal Transition Study 2012 (NLTS 2012) presents new information on trends in the characteristics and experiences of youth in special education across the country.

Preparing for Life after High School: The Characteristics and Experiences of Youth in Special Education, Volume 3: Comparisons Over Time