States and schools that received more than $7 billion dollars in federal funding from Race to the Top (RTT) and School Improvement Grants (SIG) generally reported using more of the policies and practices promoted by these programs than those that did not receive such grants, according to a new report released by the U.S. Department of Education’s Institute of Education Sciences. The RTT and SIG programs used a variety of strategies to improve student outcomes and turn around our nation’s low-performing schools.

So far, evidence on how states and schools are implementing the RTT and SIG programs has been limited,” says Lisa Dragoset, a senior researcher at Mathematica and director of the evaluation. “This study tapped state and school administrators to shed light on these programs and lay the groundwork for a future report that will examine whether these programs helped increase student achievement.” 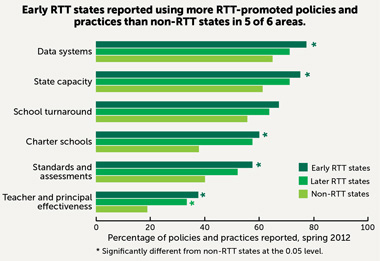 Through structured telephone interviews in spring 2012 with administrators in 49 states and the District of Columbia, the RTT analysis found: 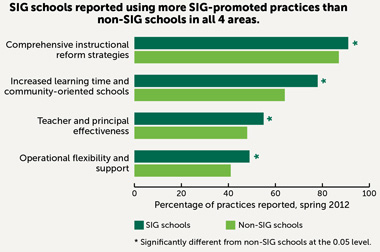 Through surveys of school administrators at 470 schools (290 SIG schools and 180 non-SIG schools) in spring 2012, the SIG analysis found:

Cheryl Graczewski, a senior researcher at the American Institutes for Research (AIR) and one of the report’s authors, noted: “For practitioners and policymakers, this report not only identifies areas that states and schools have addressed, but also highlights areas where additional attention may be needed.”

About AIR: Established in 1946, with headquarters in Washington, D.C., the American Institutes for Research (AIR) is a nonpartisan, not-for-profit organization that conducts behavioral and social science research and delivers technical assistance both domestically and internationally in the areas of health, education, and workforce productivity. For more information, visit www.air.org.

In this study of more than 500 schools, 60 districts, and all 50 states and the District of Columbia, Mathematica is conducting an implementation and impact analysis of Race To the Top and School Improvement Grants, two programs that aim to foster systematic school reform.

In Focus: Examining Schools' Use of Practices Promoted by School Improvement Grants (In Focus Brief)

Usage of Policies and Practices Promoted by Race to the Top

Executive Summary: Usage of Policies and Practices Promoted by Race to the Top and School Improvement Grants